skip to main | skip to sidebar

Off to Africa (again)

Well, I'm off to Africa on Monday. Another packed trip, visiting five cities in four countries.

Here's my list of public events. My African friends - I hope to see you at one or more of my events. Don't forget, the member breakfast is (once again) on a topic relevant to the syllabus (E1, E2, E3, P3, T4B). Contact your local CIMA office to book a place. 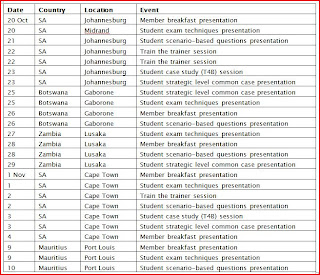 Going up the verbs

CAUTION - THIS POST RELATES TO THE CIMA 2010 SYLLABUS, SO IS NO LONGER VALID

"what about verbs that go up the hierarchy level. e.g. if it asks you to discuss something, would that mean you have to define, explain and write down pros and cons with a conclusion at the end?"

Good question, as it shows that you're really thinking about the verbs.

The simple answer is 'no' - if the question asks you to 'Discuss...', and you can answer it well, then it's obvious that you could have defined or explained, had the question asked you to. Your job, in the exam, is to answer the question asked. Any time you spend at a lower verb level is probably wasted. In exam terms, that means you get no marks, despite the fact that what you write is 'correct'.

There's one exception - if you get a question that says 'Advise...', and there haven't been previous requirements to 'explain...', 'discuss...', etc. Advice is a process, the last step in which is to recommend.

Take a look at the verbs article, and it should become clear.
Posted by theguru at 16:50 No comments:

K asked:
I have a question relating to time saving. I'm also worried that my English and grammar will let me down and I don't want to compound this by not meeting the examiner's expectations.

Well, K, this is an easy one. There's no problem at all in using common abbreviations (NEDs, ABC, BPR, NPV...) in your answers. The correct form is to write the term in full, the first time you use it, followed by the abbreviation in brackets. From then on, just use the abbreviation.

For example, "If you are learning about Non-Executive Directors (NEDs), you might consider the number of NEDs on the board, their independence, their appointment, and their responsibilities. NEDs should..." You get the idea?

Please DO NOT 'invent' your own abbreviations. Don't refer to the organisation as 'the org', or to variances as 'vars'. This just makes your written work look unprofessional.

In general terms, your English only needs to be good enough so the reader (the marker) understands clearly what you mean. The CIMA exams are NOT a test of written English.

theguru
The CIMA Guru is the alter-ego of David Harris, author of CIMA: Pass First Time. David has been a lecturer for 20 years, and spent five years as a CIMA examiner. He is now an exam techniques specialist and freelance lecturer.